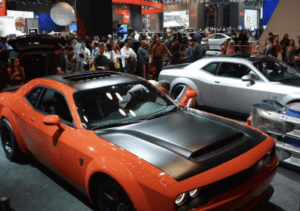 Simulate the feeling of driving high perfor-mance racing cars including the effects of acceleration, gear shifts and deceleration.

As of February 2019 over 170,000 simulated drag races have been experienced with no actuator issues or maintenance required. 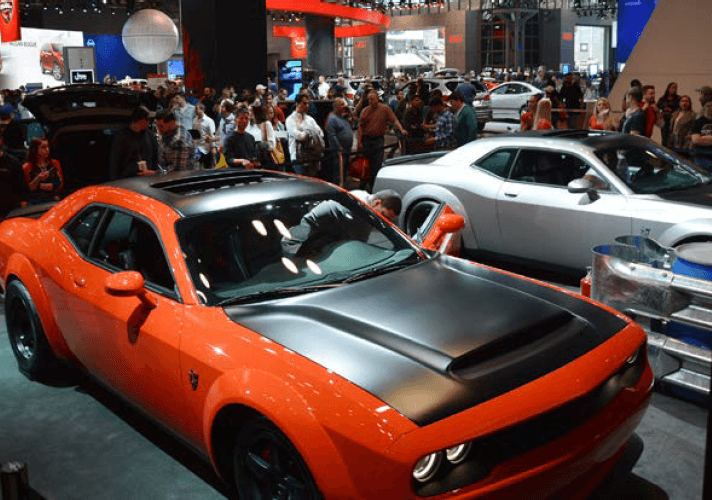 Sigma Integrale is a small company in Pomona, Calif., that has had a big impact on motion vehicle technology. From its origins in driver development at local race tracks, Sigma develops full-motion vehicle systems that simulate real driving experiences in high-performance go-kart cockpits, high-performance racing cars and even big-rig trucks. At first, Sigma hosted various car racing events at local race tracks, installed professional timing systems, managed the events and trained new drivers in real-time. From this experience, the company realized the effectiveness of virtualizing the driver training experience.

Sigma soon began developing various types of unique single-seater simulator cockpits as an extension of its driver training incentives. Drivers sit in a custom simulator chassis and “race” in a virtual environment against the clock, or against the computer, or with other real drivers around the world. The authenticity of the experience comes from the motion system that simulates the bumps, turns, acceleration and braking maneuvers inputted by the driver.

It wasn’t long before the company caught the eye of the marketing department of Fiat-Chrysler Automotive (FCA), makers of the Dodge Challenger and its muscle-car extraordinaire, the 840 HP V8-powered Dodge SRT Demon, first unveiled in 2017. Dodge wanted the motoring public to experience the thrill of owning one of these wheeled rockets—but was not eager to have every prospective buyer or aspiring street racer take an actual test drive on the roads. That’s when FCA came up with the idea of developing a Dodge SRT Demon simulator that could be featured at auto shows.

“Our company’s first big break was getting FCA as a customer in 2013,” said Howard Lin, principal and head of engineering, Sigma Integrale. “After working closely with FCA for three years on various projects, our second big break was when Dodge came to us in 2016 and said they were working on a really secret project car based on their Challenger line that would be so fast that it would be the only production car capable of popping a ‘wheelie’ off the line. They wanted us to create a drag-racing experience out of that with a pair of car simulators that could be used at auto shows.” The final design would have two actual Dodge SRT Demons (sans drive trains) side-by-side as in head-to-head drag racing. In front of each car was a large video screen of the quarter-mile track; between the cars, an array of starting lights known as a “Christmas tree.” Test drivers could compete for lowest elapsed time and highest top speed.

Recreating the feel of accelerating in the Dodge SRT Demon was a challenge that was a magnitude greater than Sigma had experienced before. The Demon goes from zero to 60 mph in a mere 2.3 seconds and generates about 1.8 Gs off the line, a high enough force to lift the entire front end off the ground (i.e. popping a wheelie). In fact, Sigma determined that to recreate this movement, they would need four fast and powerful actuators in the suspension – two in front and two in back – to provide the necessary force and lift. 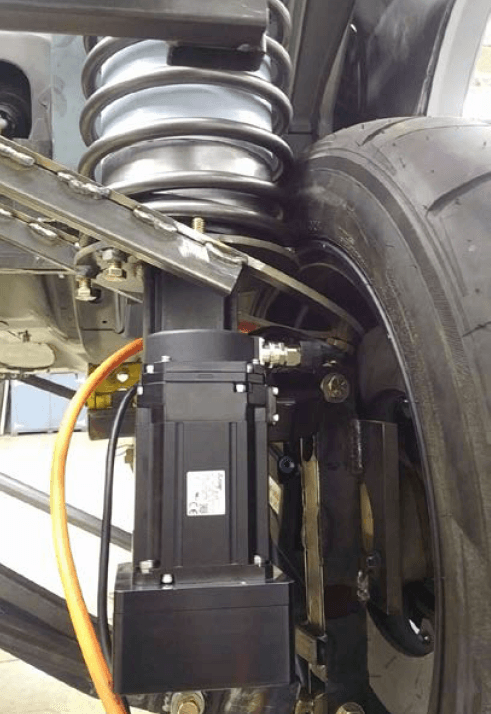 Tolomatic actuators are compact enough to fit into the space inside the suspension’s
coil spring normally occupied by the shock absorbers. They are also powerful enough to
create the necessary force and lift that allow the Dodge SRT Demon drag race simulator to“pop a wheelie.”

Revving up the design

“Because we needed up to 12 inches of lift in the front end of the car to simulate initial acceleration, the only way we could do it was with just brute force.

That meant replacing the suspension parts with electric actuators capable of producing 2,000 pounds-force each and lifting the front end 12 inches in a fraction of a second. In addition, the actuators had to be compact enough to fit into the suspension space without altering the outside appearance of the car,” said Lin. They initially considered using hydraulic or pneumatic rams due to the force and speed requirements, but quickly rejected them because they wanted precise control and didn’t really want to manage the potential issues that hydraulic and pneumatic systems can typically have in a traveling display for the auto show environment.

During the simulated drag race, as the driver launches the car, the front end rises 12 inches and then drops in steps as the driver goes manually through the gears. The rate of rise and drop are all in proportion to inputs from the driver, giving an incredibly realistic response made even more so by the sound effects. When the driver brakes at the end of the quarter-mile run, the nose of the car characteristically dives and the rear end rises in response until the car comes to a “stop.”

In specifying the electric rod actuators for this project, Lin had a list of features that were deemed critical. First, the actuators had to be powerful and quick. Next, they had to be compact enough to fit into the space inside the suspension’s coil spring normally occupied by the shock absorbers. They had to be programmable and had to demonstrate reliability with low or no maintenance. After researching as many as 50 different actuator suppliers, Lin selected Tolomatic’s RSA electric rod-style actuators with planetary roller-screws. 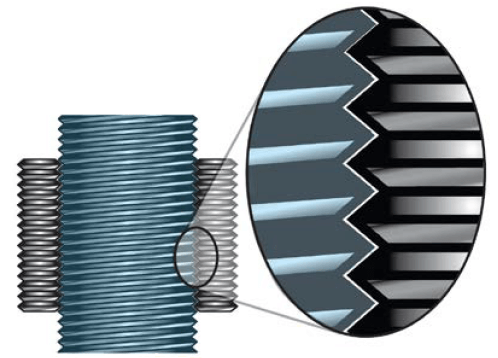 Roller-screw actuators offered the highest force, lowest maintenance and best reliability of all electric rod actuators. “In general, screw mechanisms provide the means to produce linear motion by the rotation of either the screw or nut in an assembly. The screw is a cylindrical element that has threads; the nut is a matching component that rides on the screw. Each component is capable of rotating independently upon the other. Linear motion occurs by restraining one element,” he said. 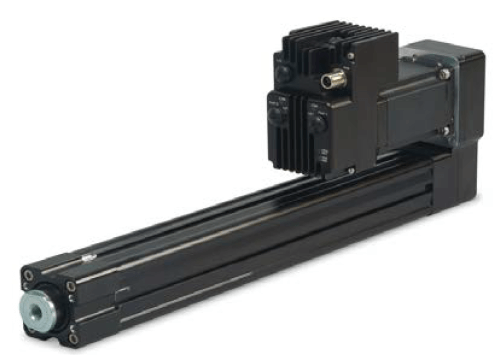 Tolomatic RSA electric rod-style actuators produce 2,000-pounds-force each and lift the
front end of the Dodge SRT Demon 12 inches in a fraction of a second.

A roller screw transmits force through multiple threaded rollers in the nut. These rollers are allowed to rotate within the nut while contacting the thread form of the screw. With numerous rollers, it provides significantly more contact points with the screw in the same space compared to other types of screw technologies, resulting in very high force transmission capabilities, a compact size and a longer life compared to other screws of similar force capabilities.

Lin chose roller screw actuators for the Dodge SRT Demon project because of their exceptional performance but also because of all of Tolomatic’s free, helpful design tools — such as on-line actuator sizing software and downloadable CAD drawings to help customers specify accurately.

Results at the line

Most of the design and building of the two simulators was done in 2016, and the system debuted at the New York Auto Show in early 2017. Since then, the simulators have appeared in four more national auto shows and 24 National Hot Rod Association (NHRA) events in 2017 and 2018. To date, the simulators have been “driven” by 57,600 drivers with an additional 25,000 passengers adding to the load lifted by the actuators. Since each driver gets to run the drag race three times, that means the actuators have lifted and cycled the cars through their simulated drag races a total of 172,800 times – or 86,400 wheelies per car.

Sigma Integrale plans a third season for the Dodge SRT Demon drag race simulator at NHRA races. According to Lin, the project’s success really speaks for itself. “After nearly 87,000 cycles, we never had to maintain the actuators and we never had a failure. In fact, we only bought a total of eight actuators for the two cars, and they survived thousands of cycles of torture testing in our shop in addition to the continuous torture at the auto shows,” said Lin. 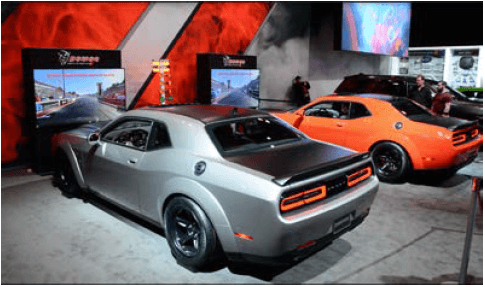 During the simulated drag race, as the driver launches the car, the front end rises 12
inches and then drops in steps as the driver goes manually through the gears.

While Sigma Integrale’s automotive simulator projects offer entertainment at auto shows and video arcades, the company is also working on vehicle simulators used in training over-the-road truck drivers and is even experimenting with remote vehicle operation with live and real-time motion telematics. In all cases, electric actuators are playing a key role in the company’s design success.