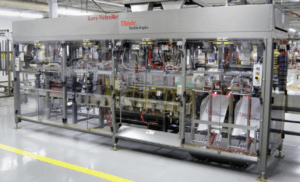 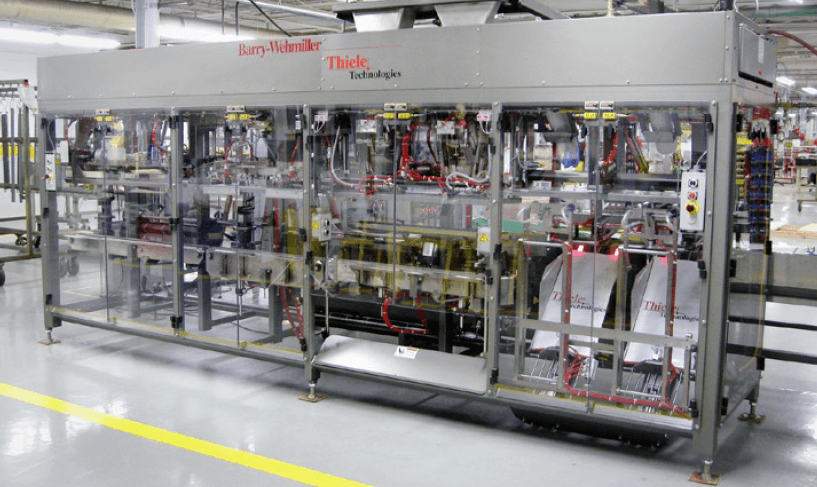 MINNEAPOLIS, MINNESOTA, USA—Thiele Technologies, a leader in packaging technology and equipment, recently faced the problem of how to compensate for inconsistent bag dimensions on its popular modular bag filling and sealing system. Thiele serves customers in the diverse bulk-materials processing industries, and the bagging system is designed to measure, fill and seal bags containing anything from pet food to salt, sugar, dirt, seed, fertilizer or animal feed. Many of Thiele’s customers had switched to low-cost bags with irregular dimensions. These irregularly sized bags were slowing the production process, which requires high-speed accuracy to meet manufacturing goals.

Since repeatability is critical to the filling and sealing operation, Thiele engineers sought a solution that would increase accuracy, flexibility and productivity for packagers. They found their solution in four custom electric screw linear actuators from Tolomatic, Hamel, Minn., that precisely position incoming empty bags. The bagging system now automatically compensates for variations in bag dimensions and eliminates manual setup when changing bag sizes.

The original version of the bagging system was automated except for the tray that positioned the empty bags prior to them being picked up and inserted into the filling line. When using high-quality bags with consistent dimensions, the trays required only a simple manual adjustment at the start of a run. However, when customers began switching to low-cost bags, some would not be positioned accurately, resulting in improper filling and sealing.

“Pet food manufacturers were forced to switch from paper bags to woven poly bags because their customers—large retail chains—would reject entire truckloads of product if there was a single ‘leaker’ bag,” says Jon Gifford, R&D manager with Thiele Technologies. “Woven poly bags proved to be much tougher, but because of higher costs, China has become the predominant supplier. With lower cost has come lower quality, however. With bag lengths varying by as much as three-quarters of an inch, bag handling problems occur. To solve this problem, we developed a ‘bag top reference’ mechanism to compensate for these varying lengths.” 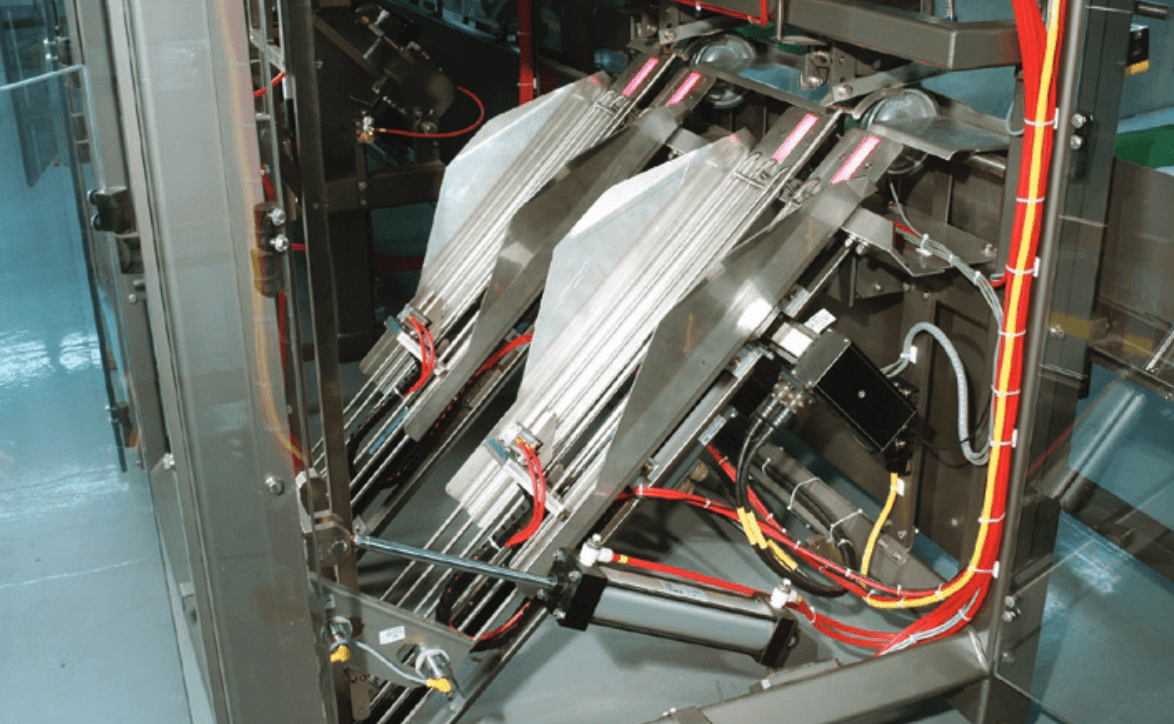 Two ganged Tolomatic actuators center the bags in the staging trays while two other actuators adjust the vertical position.

Thiele’s new bag top reference mechanism uses four modified-standard Tolomatic B3S10 rodless electric screw actuators to precisely position the incoming bags before they are inserted into the filling/sealing line. Two of the actuators, each one operated by a separate servomotor, adjust the vertical position of the bags. As bags are loaded into the staging trays, the vertical actuators catch the bags and lower the bag tops to a precise reference point determined by two video cameras controlled by the system’s PLC. 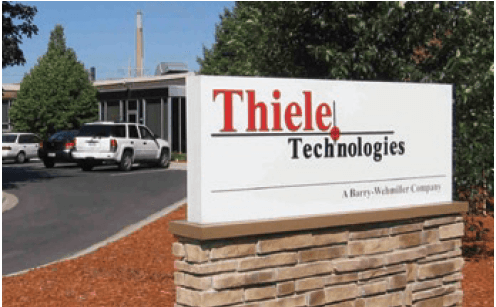 Located in Minneapolis, Minn., Thiele Technologies is a leading manufacturer of bagging, sealing, palletizing and conveying equipment for the packaging industry.

At the same time, the bags are centered in their trays by two horizontal B3S10 actuators that have been extensively modified. Each horizontal actuator has two carriers riding on a screw with right-hand threads on one half and left-hand threads on the other half. As the screw turns, each pair of carriers moves toward each other to center the bag in the tray. The two actuators are joined by a coupler and are operated by one servomotor connected by a compact 180-degree Tolomatic belt drive. Once the bags are vertically aligned and centered, they are picked up by a pneumatic arm and inserted into the filling/sealing line.

“This new design meets our criteria for repeatability because it automatically compensates for variations in bag length and width and eliminates filling and sealing problems,” says Gifford. “The design tolerance for positioning the tops of the bags is only +/- 0.031 inches, and now we can maintain that precision even when bag dimensions vary.”

Thiele’s bagging system is composed of a series of modules that can vary with each customer application. A typical application would include a bag-handling module, a filling module and one or two sealing modules, depending on the style of bag being sealed. The system will handle bags from 11 to 19 inches wide and 16 to 41 inches long. In addition to compensating for varying bag dimensions, the new automated bag top reference mechanism now allows an operator to change the size of the bag being run with the simple touch of a button. The bagging system can fill and seal paper bags that have a hot-melt glue band and a double-fold seal, or paper bags with an inner poly bag which can be individually heat-sealed prior to hot-melt sealing of the outer paper bag. The system can also handle zip-lock style poly bags that require heat-sealing only.

While many of the other actuators in the bagging system are pneumatic, Gifford says that he wanted to use electric screw actuators for the bag trays because they are faster and more accurate, but there was no off-the-shelf solution available. “Tolomatic was willing to work with us to provide a modified-standard solution that was also affordable,” he says. “In addition, the design of Tolomatic’s actuators is very robust. For example, the stainless steel band that seals the actuator as it moves protects the internal parts from dust, dirt and corrosion and reduces maintenance better than other designs. This is very important when bagging products like salt, dirt or fertilizer.”

The use of the rodless design and the ganged actuators operated by a single motor was a great space-saving feature, according to Gifford. The compact design allowed Thiele to replace the manual tray adjusters without significantly modifying the design of the bag trays.

Because the bagging systems need to be configured differently for each customer application, Thiele required considerable flexibility in the design of the Tolomatic actuators, according to Ryan Klemetson, Tolomatic regional sales manager. “Working through our distributor, Braas Company, Eden Prairie, Minn., we were able to take an off-the-shelf B3S product and modify it to Thiele’s needs. We were able to provide for multiple motor and drive configurations, multiple stroke configurations, manual adjust, right- or left-hand drive—flexibility they needed for their customers’ applications. 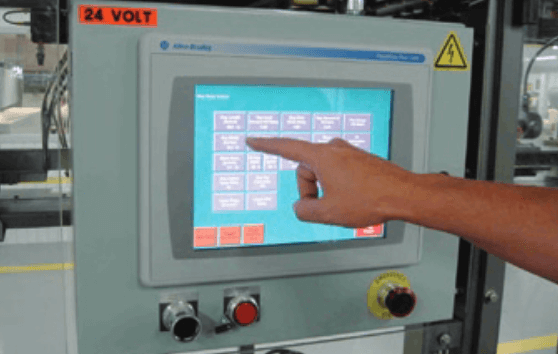 When changing bag sizes, the operator only has to push a button instead of manually adjusting the bag trays.

The compact system and ease of installation are benefits for factory assembly, and these features also will make it much easier to update bagging systems that are already in the field. “Not only will this new design be available on all new Thiele bagging systems, but we already have plans to update dozens of existing bagging systems,” says Gifford. “We will continue to offer the system with manual bag tray adjusters for packagers who don’t have problems with variations in bag dimensions, but this new design will offer boosts in both productivity and accuracy for any packager.”